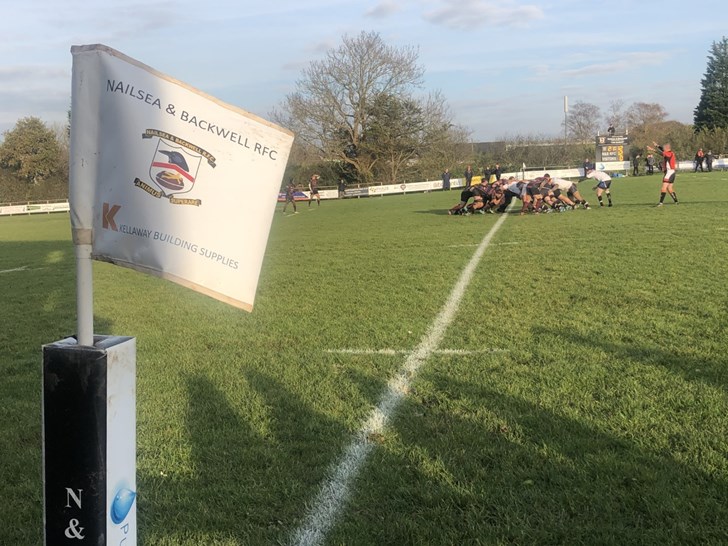 Nailsea’s determination was there from the whistle, kicking off down the slope and regaining possession.  Every player handled the ball in the first two minutes with play from one side of the field to the other.  Elswood's deft grubber kick found touch in the visitors 22.  From the resultant line out, won by Nailsea, saw the experienced Dickie Palmer’s legs pumping him over taking three defenders with him.  Elswood converted to go 7 nil up on 7 minutes.

Captain Luke Sharp raised cheers from the home fans with a bullocking 15 yard run before Nailsea were pinged for crossing.  However, some beautiful running lines by Outside Centre, Ryan Love, before offloading to Harrison Gould to score in the corner came courtesy of a cheeky steal by Joe Reed in the maul. 12 – 0.

A half the pitch run by Ben Perfect was halted two yards short before Oldfields first visit into Nailsea territory in 25 minutes, the defence held firm.

Nailsea then got the benefit of a penalty reversal to get back into Oldfield 22 where a penalty under the sticks slid past.

N&B were rewarded for their efforts in what should be called a forwards try with 5, 3 and 8 combining to send Gould over for his second try. Tom Crossman was to cause the visitor’s problems all afternoon.

Oldfield finally opened their account after Nailsea were penalised twice just before half time making the score 19 – 5.

With a mounting penalty count Nailsea were lucky that Oldfield’s kick missed at the restart.  Moments later from a missed lineout five yards out from their line, Nailsea conceded their second try.

A yellow card did nothing to help the home teams cause, although they briefly threatened when a kick over the top in Oldfield’s 22 was failed to be gathered and a length of the field try got the visitors within touching distance 19 – 17.

Both sides probed over the next 20 minutes, but Nailsea were on the back foot, until the visitors lost a prop to the bin.  Finisher, Jake Tansley, finally crashed over for his initial first team try, having made some telling runs in midfield.

Sharp then charged down a clearance kick to keep Oldfield defending their 22, before the champagne moment when Elswood's drop goal attempt sailed past the posts, before bouncing over the line, where Hooker, Ryan Barrow, beat the defender with an Ashton splash touchdown.  Final score 31-17.