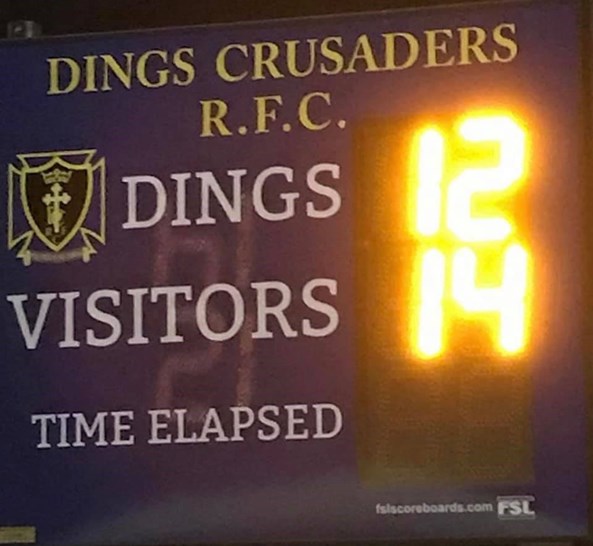 Match Report - Dings Crusaders U18's 12 - 14 N&B U18's
Nailsea & Backwell U18’s continue their winning streak with a hard fought 14 -12 victory at Dings Crusaders.
In Nailsea & Backwell’s first of two consecutive Friday night games under floodlights, the first half saw both teams resolutely defend their own try lines. Strong running by full back Tom Fortune and great tactical kicking by Sam Chidzey and Captain Emile Swanson saw Nailsea camp in the opposition 22 for long periods in the second quarter. Matt Winter and Owen Wright were formidable in their support play and soon the dividends of this hard work saw Evan Williams being driven over the line for Nailsea’s first try under the posts. Emile Swanson converted the try.
The hosts soon responded, stretching the Nailsea defensive line from touchline to touchline, until finally finding their way all too easily to score for a converted try to bring the game level.
The second half continued in the same vein, with both teams testing each other’s defence. Nailsea started to dominate in the Line outs with George Harris being lifted to disrupt the opposition’s ball and cleanly win his own. This authority also started to come at the rucks where Nailsea won numerous 50/50s to turn Dings back on their heels.
Again, the tide turned, and the Young Ravens saw themselves camped in their half, with the Dings’ back line probing and testing the defence. Soon the deadline was broken with Dings crossing the whitewash to for an unconverted try on the wing.
This rallied Nailsea and driven on by their Scrum half Connor Mobbs and strong mauling by George Harris and Manuel Mora Soriano saw the Ravens surge towards the opposition try line. With a penalty in the middle of the park, Nailsea kicked to touch for the opportunity to catch and drive. Again, Harris cleanly won the ball in the lineout, and the following drive saw Craig Beasant sneak around the blind side to score near the posts. Swanson, easily converted the try to give Nailsea a slender two-point lead.
Dings came back with vengeance. Probing each of the wings with swift hands and hard running. The last five minutes saw Nailsea firmly camped in their own half. Only easing the pressure with kicks from hand from Mobbs and Swanson.
In the dying moments of the game, Dings strongly returned one of those kicks, breaking through on their right wing. Keeping the ball alive through excellent support play, they easily found their way through the centre with just the try line beckoning. However, with their first defeat looking inevitable, Nailsea’s left wing, Dan James, flew across the turf, for a game saving tackle just in front of the posts. The resultant knock on saw Nailsea able to control the scrum for the ball to be kicked dead to win the game.
Nailsea and Backwell Colts look forward to a home game under the floodlights at the Raven’s Nest on Friday (7:30 pm).
Tweet
Tweets by @NandB_RFC