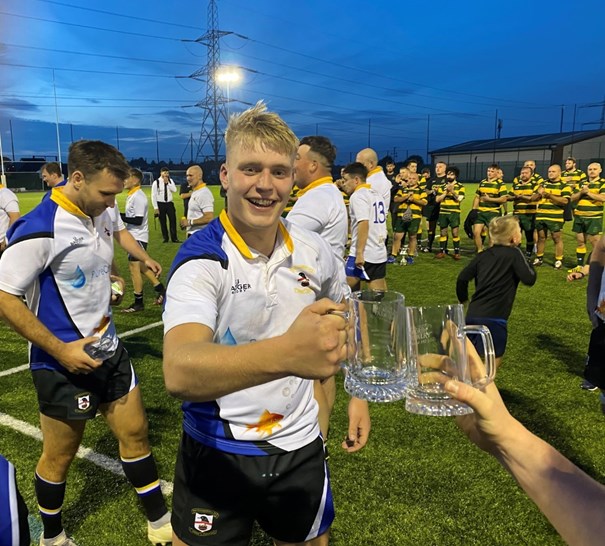 It’s been some wait, 49 years to be exact, for the Ravens as they took to the pitch at Lockleaze Sports Centre playing in their first ever final, which has been delayed from the 2019-20 season due to Covid, and ended it as winners following a topsy turvey affair.

That being said the North Somerset based side had to do it the hard way against the Imps who lead for long periods of the contest and had been 21-7 and 31-24 ahead before the Ravens showed great character to pick up the trophy.

“I think that feels about as good as anything I can feel,” said Hill.

“It was an unbelievable, unbelievable game of rugby. Imperial just looked dominant. They were beaten us up physically and the boys had to dig in really deep, really deep and they did.

“To come back to 31-31 all to start with was unbelievable and then to go on to win the game incredible. I can’t find the words to be honest with you, incredible.”

Joe Reed went over for the first score after 10 minutes when he picked the ball up before kicking and running onto it before diving over to send the travelling supporters into raptures with Jamie Elswood adding the conversion.

However, the Imps hit back with three unanswered tries through Ash Tucker Dan Bisset and Tom Morgan with each of them converted by Connor Sheehan.

But two tries in two minutes turned the final on it’s head. First Harvey Flower went over in the corner before Dec Hay went under the posts with both converted by Elswood.

Jamie Sullivan then went over and it looked like the comeback was complete but the referee deemed there had been a knock-on in the build up as the half-time whistle sounded moments later in what was truly a breathless opening 40 minutes.

Sheehan restored Imperial’s lead when he went over before dusting himself down to add the extras.

Elswood scored in front of the posts to cut the score down to four before Sheehan scored with a penalty to go 31-24 ahead.

But the Ravens, who had won six games out of six before Saturday, showed their resolve when George Stirling dived over with Elswood adding the conversion to level the scores once again.

And with seconds left the Ravens were given a penalty and a chance of winning the match.

Silence filtered in all areas of the ground as Elswood stepped up and smashed the ball in between the posts to secure the win and their perfect start to the season.

“I have never felt anything like that before. That’s history made for our club now and it is a big statement on our league, hearing the fans and kicking the winning points,” said Elswood.

“I have never felt anything like that and it’s one of the best feelings I’ve had so far, especially my rugby career. It’s class.”

Before the game Elswood received a message from Bristol Bear’s Callum Sheedy sending over his best wishes.

The 2019-20 Player's Player of the year put in a commanding performance with 14 points, kicking over all four conversions and two penalties including the one right at the death.

When asked what his thoughts were on that last minute penalty, he said: “Don’t miss. I’ve got to thank all the forwards they do their job. Obviously I’ve just got the role of kicking it over.

“Luckily it was right in front (of the posts), last play of the game and win it for the boys. Hopefully I’ve done them proud, they have done me proud and that’s a heck of a win. Hopefully go celebrate now it’s really good, really good.”

Hill on Elswood said: “He deserves it, he’s worked incredibly hard. During Covid what people don’t see is the amount of times they go up an kick over and over again and practice.

“Our hookers Harvey (Flower), who has moved to a hooker this year has been out practising over and over again. The hours they put in to do this is incredible and they deserve it. They really deserve it. I have to say Imperial were unbelievable and a massive credit to them.

“They were as physical as I have ever seen a side at our level but I just couldn’t be prouder of the lads.”